I’ve been wanting to write about this. For a couple months now. Years, if I’m honest. I’ve been afraid I suppose. Felt as if it were too personal to share. Going a little too deep. Exposing a little too much. Even for me. But I’m a coward if I stay quiet. And most of all. Saying, “it’s acceptable,” if I do. Because the truth that is to come. The story I am about to share. It’s not acceptable. Not one bit.

I realized today it was time to come clean. Today. As I set out for a fun date with my girl and a good friend. One we had been planning. One that began at our local theater. My girl was finally ready for Star Wars on the big screen. The Last Jedi. When an older gentleman. Actually. No gentleman at all. Threw popcorn at me from two rows above. Yelled, “put your phone away,” as I showed my girl a photo of herself. The one taken in excitement just moments before we sat down. The commercials were still playing. It was no where near the start of the show. And it was alarming to me. Frightening actually. A complete stranger. Committing an act which I would equate to spitting in my face. An attempt to shame me. Not only in front of his poor wife. But in front of my girl. Not okay. Not one bit okay. And so. Today. I need to tell you.

Rich was his name. Dirty Rich I later learned. I met him at a party as a young coed at Florida State University circa 1996. Barely 18 years of age. He was tall. Older. Charming. Nothing like the boys back home. I was intrigued. I liked him. It was an odd night for me. I mean. Kind of. I was used to going out. Drinking too much. Unsuccessfully chasing hippy boys. Who wore dreadlocks. And reeked of marijuana and body odor. Staying out way too late. Running through Taco Bell before we’d head back to the dorms. But that night I had chosen to go out with a new group of friends. Girls I barely knew. And without my best girl. My sidekick. She felt like staying in. I did not.

I don’t remember much of what happened after I met him. Dirty Rich. Not only was I drinking shitty beer. A lot of it. I had popped a pill of who knows what my new friends offered. I willingly accepted. Swallowed it. After all. I was out for a good time. Maybe Rich saw me take it. He probably did. Maybe that’s why I met him in the first place. Surely he wouldn’t be interested in me otherwise. 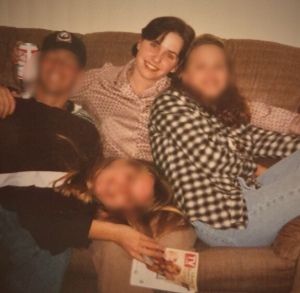 You see. I was in a rebellious stage. Not only in my behavior. But in my physical appearance, too. I had grown tired of the, “you’re so pretty,” comments I’d heard my whole life. I wanted to be seen for more than that. Admired for anything but my looks. I wanted to be known. Truly known. And so. After senior pictures. I chopped off my long locks to merely two inches in length. Dyed it the deepest purple I could find. Bought clothes a size too big. And by college. By the time I met Rich. My hair was black. In an awkward stage of growing out. And I was in no way pretty. Not one bit.

Rich and I walked to the gas station. I think. I remember sitting next to him on the curb by a pay phone. Vaguely remember getting into a cab. And after that. Fragments of memories. In his bed. Naked. Him. On top of me. Me. Barely able to keep my eyes open. Let alone move. I’m not sure how long it went on. I was in and out. But I knew what was happening. And I couldn’t stop it. No matter if I tried. No matter if I wanted to.

I’ve told this story a gazillion times in the last 22 years. To myself. Shared it with only a few. And every time. Every single time. Another story starts. The but one. But I was drunk. And I never should have gone out with those girls. And really. They should have stopped him. Stopped me from going with him. My best girl would have. Plus what was I thinking. I never should have taken that pill. And while there may be some truth. A lot of it. In those statements. They should not come after a but. Ever. They should not justify. Excuse. Accept Rich’s actions. Disrespect. Rape.

I feel sorry for that girl. The one who woke up the next morning. Pretended like nothing was wrong. Pretended she had merely been on a date. That she had not been violated. Pretended she had not been raped. I remember searching frantically for my clothes in his messy room. I especially wanted to find that navy bra. The Victoria Secret one that I had purchased with my Christmas money. Too shy to ask him for help. I never found it. He probably hid it. Added it to his collection. The one he proudly accumulated. We exchanged numbers before he dropped me at the steps of Dorman Hall. Kissed. Pledged to see one another again.

And we did. We went to parties together. Listened to Jimmy Cliff in his living room. Went for Slush Puppies at the gas station. Shopped for CDs at the local music store. I willing went to bed with him again. Then another time, too. I introduced him to my friends. Me to his. Accepted his proposals. Time after time. Until finally. I could do it no longer. I told no one how it began. That I dated him as a means of validating the rape as sex. Consensual sex. Remember. I had taken that pill. Drank entirely too much.

It took me 10 years to admit what happened. To finally say I had been defiled. Trespassed upon. Degraded. To tell someone. A professional. I had been raped. And it’s only recently that I’ve begun to eliminate the but from the story. For it is still my default. And I am grateful for the women who have come before me. Who have been brave. And bold. Shared their truths. And no longer accepted them as fine. Excusable. Okay. Who have said, “me, too.” Because they have given me the courage to share my story. With all of you.

Today. I showed my daughter that same courage. The three of us proudly walked out of that theater. We shared our experience with management. Asked to be allowed to a later showing. Had an early lunch instead. A delightful one at that. One that included chips and queso and Triominoes. In doing so. I taught my girl that it is not okay to accept that kind of cruelty. Utter disregard. Violation. From anyone. Especially a man. For I am no stranger to accepting this type of behavior. I’ve done it for most of my life. And today. For the first time. I publicly said, “it’s not okay.” And while I pray she is never treated with irreverence in any way. My wish. Should she be. Is that she will take this path I showed her. The one of courage. Bravery. Pride. And respect for oneself.

Please don’t pity me. Or tell me you’re sorry I was raped. Jesus. My redeemer. My savior. He has already taken care of that. Instead. I want you to share your story. In whatever capacity you’re capable. I urge you to be brave. Have courage. And please help me. In showing your daughter. Her friends. And any girl who is watching you. That it is not justifiable. Or acceptable. Or okay. I want you to show them their worth. I want you to teach them self-love. Because like everything else in this life. It always comes back to love.